There are some low-tech, low-cost ways to spot cameras in an Airbnb.

When Nealie and Andrew Barker and their five children checked into a house through home-rental service Airbnb in March, they soon made an unsettling discovery that interrupted their European vacation.

“We just found a camera hidden in a smoke alarm case in the private living room of a listing. We were traveling with children,” Nealie Barker wrote in a Facebook post. “The host admitted to the concealed camera over the phone only after presented with our irrefutable proof.“

The family relocated to a hotel that night. After a complaint to Airbnb, the service eventually refunded the family’s money and apologized.

Multiple Airbnb travelers have reported finding hidden cameras in their vacation rentals. Under Airbnb rules, hosts must disclose if they are actively recording on the property, and hosts are not allowed to use surveillance devices in bedrooms and bathrooms, even if they do disclose it. But what about the cameras that are not being disclosed?

As the Barkers’ case showed, hidden cameras can be placed in unassuming objects, and many are very, very small. Here are some sensible things you can do to make sure you are not being secretly watched during your Airbnb stay, according to security experts.

1. Look for objects out of place

Jack Plaxe is founder and director of Security Consulting Alliance in Kentucky. He said travelers can ask themselves, “If someone were trying to record me, where would they place the camera to get the images that they want?”

Look for things in unusual places, said Carrie Kerskie, the CEO of Griffon Force, a Florida-based group that advises clients on identity theft and personal privacy concerns, like hidden cameras. “If you see a smoke detector in a place that looks kind of odd, if there are two of them kind of right next to each other, that could be a red flag,” Kerskie said.

2. Shine a light to pick up the reflection of lenses

One easy practice is turning off the lights in a room and using a light to slowly scan where you suspect a camera may be. “[Cameras] have a lens that is like glass,” Kerskie said. “If you’re looking at a clock radio that is next to the bed and you see an unusual spot that’s reflecting more than just the surface of it, that could be a sign.”

“If you turn off the lights and shine a [light] over a suspected device, you will most likely get a reflection off the lens,” said Andrew Barker, who found the hidden camera in his family’s Airbnb rental. “It is helpful but could also create false positives where something shiny in the device gives off a reflection and it isn’t actually a hidden camera.”

This is how Barker, who works as an IT consultant, said he discovered the hidden camera in his family’s Airbnb rental. On his travel blog, he outlined how renters can use a network scanner app that will list the devices that are connected on the network, along with their IP addresses and their manufacturers. In Barker’s case, his suspicions were aroused when a manufacturer was named “IPCAMERA.” 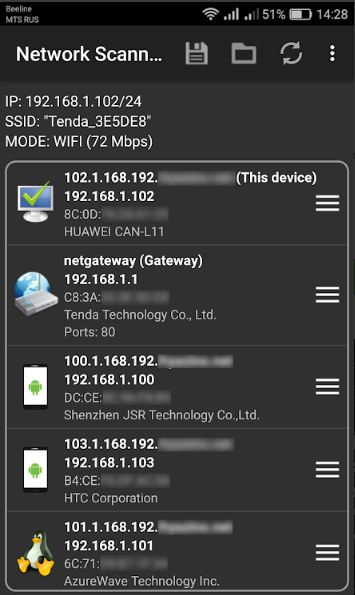 The Network Scanner app displays the IP addresses and the names of the devices hosted on a network.

“If the camera was not on the same network, I would not have found it,” he told HuffPost.

Barker used an Android app called Network Scanner. There are also apps like Fing, which is available on both iOS and Android, that can similarly scan the Wi-Fi network and list all the other devices that are using that same network.

“If you see something else on there,” Kerskie said, “that could be an indication that there is a camera.”

Of course, if the hidden camera is being powered by a private network that you do not have access to use, a scan of your host’s Wi-Fi network will not pick it up. Understanding that not every hidden camera operates the same is part of the security challenge.

“Not every camera is going to be IP-addressable or Wi-Fi-enabled,” Plaxe said. “Some of these small hidden cameras just record onto a SIM card that’s embedded in the device.”

4. Unplug and cover your suspicions

If you suspect you’re being watched but can’t confirm it, one simple low-tech, low-cost solution to this anxiety is covering up objects of concern.

“If you have suspicions about something in the room, like, for example, an alarm clock, it’s very simple to take a piece of clothing out of your suitcase and drape it over the alarm clock,” Plaxe said. “If there’s a lens there, it’s not going to capture any images of you with your T-shirt sitting over it.”

You can also unplug objects that do not need to be plugged in. Some hidden cameras need a plugged-in power source to function. Kerskie said she unplugs alarm clocks: “Anytime we travel, whether it’s in a hotel or we’re in an Airbnb… first thing I do with all the clocks, especially on the nightstands in the bedrooms, I just unplug them and put them in a drawer.”

“These type of systems work only where this is a level of trust. Airbnb certainly takes some steps to try to ensure the people listing properties on there don’t have criminal backgrounds and are legitimate users,” he said. “But they really don’t do an in-depth check, unfortunately. For that reason, you really are accepting some risk when you use these properties.”

“I always go with a mindset that when you’re in a common area, you could be getting videotaped,” Kerskie said. “The bedrooms, bathrooms, that’s a different story. That’s where I do the sweep.”

But don’t get too paranoid, Barker advises. His family continues to use the Airbnb service.

“I think that cases of hidden cameras are rare. I know that if a host wants to hide one, I wouldn’t know it was there and my basic techniques would not help,” Barker said. “It’s a risk-reward game. I take some minimum reasonable steps to give me some peace of mind. If I spent all my time looking for hidden cameras, I would have no time to enjoy my trip.”

0 0 0 0
Previous : Where Have All the American Tennis Tournaments Gone?
Next : Donald Trump says Tiger Woods to get Presidential Medal of Freedom – National