People cover their faces with masks to avoid thick smog in New Delhi on Nov. 5. People living there have complained about respiratory problems. 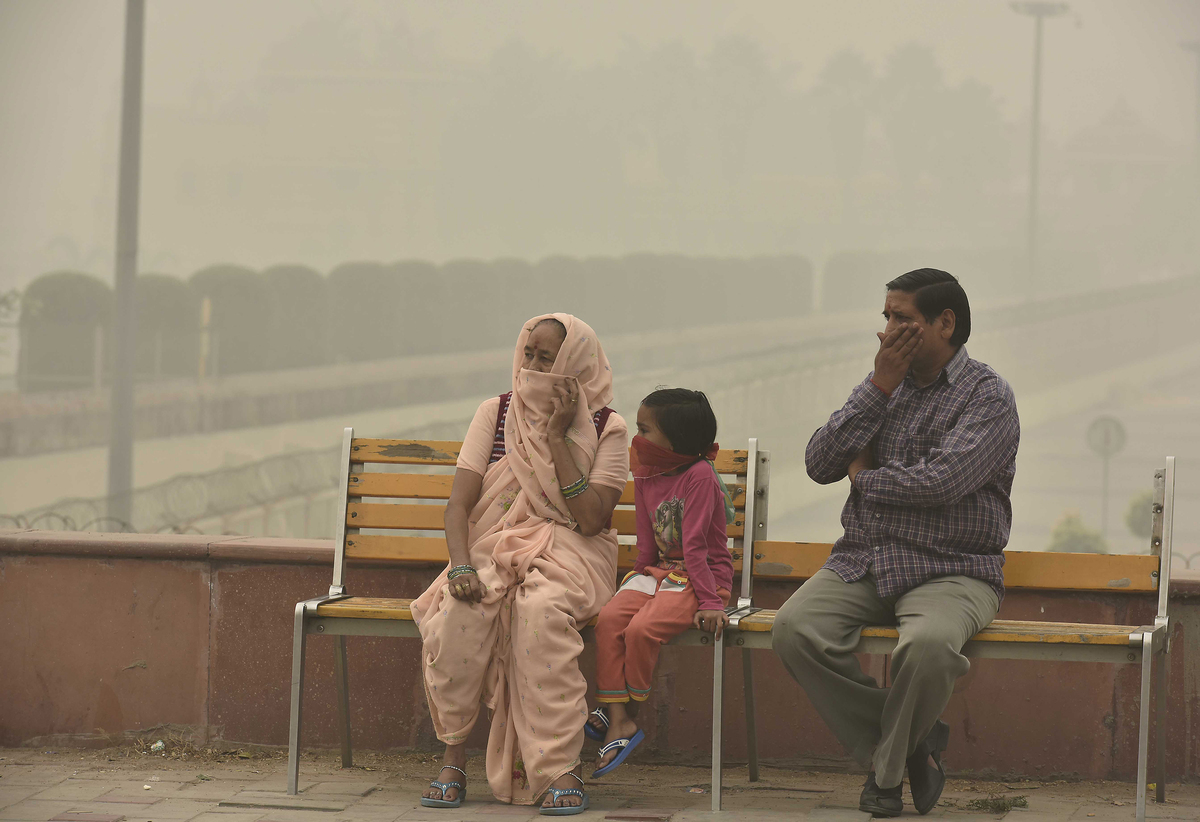 People cover their faces with masks to avoid thick smog in New Delhi on Nov. 5. People living there have complained about respiratory problems.

Last week, just after the celebration of the Hindu festival Diwali, India’s capital city was enveloped in a thick blanket of haze and smog.

On Nov. 2, 36 of the 37 air quality monitoring stations in Delhi registered in the “very poor” category. Since then, the city has been grappling with its worst-ever pollution crisis. On the Air Quality Index, an international metric used by public health officials that accounts for a range of major air pollutants, any reading above 100 is considered unhealthy. In some areas of New Delhi this week, the AQI recorded well over 900 according to daily bulletins by India’s Central Pollution Control Board.

How does it feel to live in one of the most polluted cities in the world?

Many Delhi residents complain of watering eyes, a persistent cough and a dull headache that lasts all day.

“The air smells acrid and awful; it feels heavy, as though it were enveloping all of us in a slow choke. My sinusitis is making me miserable,” says 39-year-old Reem Khokhar, who provides consultancy services to tourism boards. Work brought Khokar to Delhi in 2005 and she has lived here ever since, but she says the pollution has grown much worse in recent years.

Children, the elderly, asthma sufferers and the poor who don’t have the means to protect themselves have been the most vulnerable to the city’s bad air, says Dr. Vikram Jaggi, director of the Asthma Chest & Allergy Center in New Delhi. Every year when pollution spikes in the winter, Dr. Jaggi says he sees a 30% increase in his patients.

This month’s pollution crisis has affected many aspects of life in the city. From Nov. 3-5, 32 flights were diverted from the Indira Gandhi International Airport in New Delhi due to poor visibility. On Nov. 4, the Supreme Court-appointed Environment Pollution, Prevention and Control Authority (EPCA) declared a public health emergency and urged the governments of Delhi and other neighboring states to take steps to handle the crisis. Construction activities that could add to the dust in the air were halted temporarily. Schools were shut and government advisories were issued, asking people to stay indoors. Firecrackers have been banned for the remainder of the winter season and factories that hadn’t shifted to piped natural gas were temporarily shut down. The Dehli government also reinstated a rule, first tried during another pollution spike in 2016, that cars with even and odd license plates were allowed on Delhi’s roads only on alternate days, from 8 a.m. to 8 p.m. until mid-month.

But at the peak of Delhi’s pollution, when people all over the city were struggling to breath, two federal ministers drew wide-spread criticism for tweets that either ignored the problem – or offered a very puzzling solution.

Meanwhile, the Minister of Environment, Forest & Climate Change, Information & Broadcasting, simply tweeted an encouragement for citizens to “start your day with music.”

The ministers were roundly mocked by incredulous Twitter users, who joked that the government’s plan was to make people wear giant carrot masks or plug their nostrils with carrots.

Some responses were more serious. Tweeting with hashtags such as #EnoughIsEnough and #BullshitNoMore, Delhi residents are urging the government to act. On Nov. 5, thousands of people assembled at India Gate, a national monument, to protest government inaction.

Among them was Navdha Malhotra, associate campaign director for Help Delhi Breathe. It’s a coalition formed by concerned citizens, local businesses and aid organizations working to fight air pollution by speaking to students and the general public about the need for carpooling and switching to renewable energy.

Since air pollution is for the most part invisible, creating awareness has been an uphill battle, she says. But as it becomes more disruptive, public pressure is mounting. For septuagenarian couple Krishen and Rekha Kak, the restrictions mean even more limited mobility. Because of their back problems, public transport in buses and rickshaws is painful and uncomfortable. Access to the metro is difficult, and taxis can be expensive.

“We use our car only when we have to,” Krishen says. “We keep our doors and windows closed because of all the health warnings. Our evening walks have stopped, and even the few errands we need to do are kept to a minimum.”

Rekha suffers occasional breathlessness and eye irritation, and has stopped her morning pranayama — a yogic breathing exercise. Krishen has had a throat problem for weeks, diagnosed as pollution-related by two doctors. It became troublesome when the coughing grew persistent, he says, but their medications did not help. And even with the right medication, how long could he be expected take it, he asks, when the cause of the condition — pollution — never goes away?

Air pollution is not a new problem for Delhi. The capital city lies landlocked between other states, the Thar Desert in the southwest and the Himalayas in the north. As strong winds arrive from the plains, the pollution they carry gets trapped.

Sumit Sharma is director of the earth science and climate change division of TERI, a think tank and research institute that often advises the Indian government on energy and environmental policy. He says their research analyzing the source of Delhi’s air pollution reveals that around one-third of the pollution is from poorly regulated industries such as factories, brick kilns and cement-mixers. Another third is from vehicle emissions. Smoke from kitchens in low-income or rural areas — which often use wood or cow dung instead of gas – and dust from construction are also top contributors.

“These are the major offenders all year through,” he says. But in winter, he says, there’s another pollutant, which, when added to the mix, turns Delhi’s air into a deadly cocktail.

Farmers in the neighboring state of Punjab grow paddy and wheat. They use machines to harvest crops and this leaves a residue. In the winter season, after the paddy harvest is over and before the wheat crop can be sown, farmers set off fires on their agricultural fields, burning the residue.

These fires are responsible for a 40% spike in air pollution in the winter months, Sharma says. But though this practice has always existed in the farming community, there’s a reason why Delhi has been so deeply affected by these fires only in the last few years, he says.

“Ground water is severely depleted in Punjab,” says Sharma. Since cultivating paddy requires a lot of water, these farmers were advised to sow their crops in India’s rainy season—the monsoon—a month later than they did previously. However, strong seasonal winds during this time blow the fumes straight into Delhi.

Last year, Sharma’s group encouraged the local government to buy paddy residue from farmers and turn it into biofuel. And in August, a group of 29 Indian and international researchers published a study in Science recommending that the residue be mulched instead of burned. So far, neither the Delhi state nor the India federal governments have acted on these suggestions.

So what can suffocating locals do in the meantime?

Indoor air purifiers may be far more effective than carrots — but only when doors and windows are tightly sealed, and the filters changed and cleaned often, Dr. Jaggi says. Though many people wear surgical masks to battle pollutants, only N-95 masks, which are designed to filter 95% of the tiny airborne particles caused by severe pollution — will help, he says.

Earlier this month, the state government distributed five million of these N-95 masks to school students free of charge, after the Chief Minister of Delhi, Arvind Kejriwal tweeted that Delhi had become a “gas chamber.”

But the masks come with a catch, Dr. Jaggi says. In order to be effective, they need to fit snugly over the nose and mouth. But being a tight fit makes them uncomfortable and impractical to wear for long hours. And for many children, masks meant for adults are ill-fitting anyway.

It’s this sheer lack of options that brought citizens out to the street.

On the day of the protest at India Gate, Malhotra says it was enthralling to see people so well-informed.

“Today, dinner table conversations are often about air quality,” she says. “But when people say they just want to be able to see the stars again, it makes me really sad.”

0 0 0 0
Previous : Are My Neighbors Spying on Me?
Next : The News Roundup – International