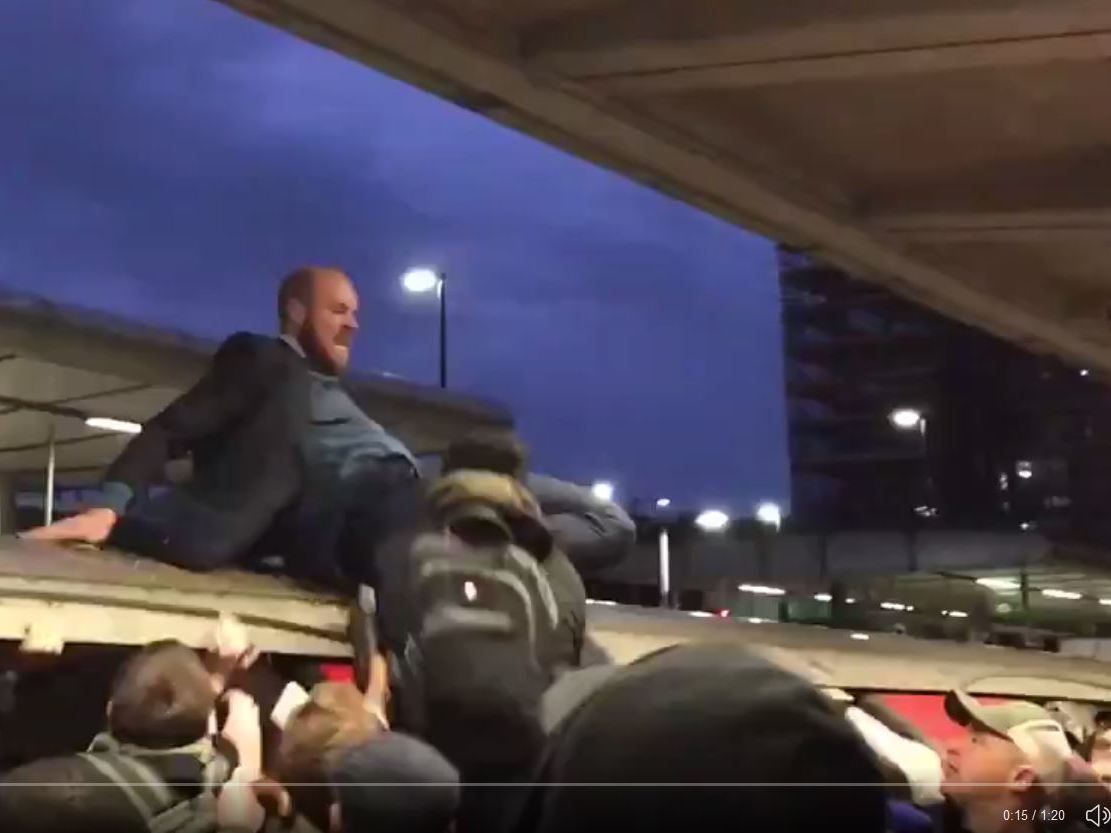 A video posted to Twitter showed a climate protester being pulled from atop a train car onto the platform below, where he appeared to be pummeled by angry commuters on Thursday in London.


An environmental protest by environmental activist group Extinction Rebellion sparked violence and disruption at a train station on Thursday. Before the sun had come up, some trains were at a standstill. Protesters had climbed atop the railcars; at least one grandfather had glued his hand to one.

The actions, the latest in more than a week of public interventions, snarled Londoners’ morning rush hour. Video from the scene shows an incensed commuter at the Canning Town station pulling one of the activists from atop the train down to the platform, where he became the center of a melee. Bystanders intervened to protect him.

Three separate actions by the climate activists took place shortly after 6:45 a.m., according to the British Transport Police. Two incidents took place at stations on the London Underground and one on the Docklands Light Railway. British Transit Police said eight protesters were arrested.

“I come here primarily because of my grandchildren,” 83-year-old Phil Kingston, who had glued his hand to a rail car at London’s Docklands Light Railway network, told The Guardian. “But I’m also very concerned about what’s happening in the poorer parts of the world who are being hit the hardest by climate breakdown. I’m a Christian and that really upsets me, to see God’s creation being wrecked across the world. … I’m longing for the government to take some actions which are in accord with the parliamentary declaration of climate and environmental emergency.”

The protesters succeeded in drawing attention to their cause, but their choice to disrupt mass transit struck some as wrongheaded.

“Why an electric train, though?” one man demanded of the activists in a video filmed at the station. “Are you guys really that [expletive] stupid?”

Transport for London, which includes the Underground and Overground rail lines, uses more electricity than anything else in the city — but it is working to be greener, as Wired reported last year.

Extinction Rebellion said in a statement it was “regrettable” that the action at Canning Town had escalated into violence.

“We are aware that one of our activists responded in self defense in a moment of panic when confronted by a threatening situation. He acknowledges his accountability for this action and we offer gratitude for members of the public who helped to protect him. To those that engaged in violence, we acknowledge that we disrupted your life today.”

“We are aware that this action was divisive,” the statement continued. “We are a broad and diverse movement with a wide range of views, and are aware that many people were not for this action. Those that acted this morning planned their action autonomously, within Extinction Rebellion’s principles and values, centered around nonviolence and compassion.”

British Transport Police expressed frustration about the disruptions and unrest that stemmed from the protests.

“Those who obstructed services are in custody and will be dealt with robustly,” said Assistant Chief Constable Sean O’Callaghan. “This type of action is completely at odds with what Extinction Rebellion are campaigning for and we will continue to urge them to not target any rail network.

“However, it was also concerning to see that a number of commuters took matters into their own hands, displaying violent behavior to detain a protester at Canning Town. Understandably, the delay to passengers’ journeys would have been annoying, but this level of response was unacceptable.”

The authorities are investigating the violence at Canning Town. Police say they have made at least 1,711 arrests in connection with the Extinction Rebellion protests across London, which have now been going on for 12 days.

0 0 0 0
Previous : ‘Clueless’ Is Being Rebooted As A Dramatic Mystery Series And, Ugh, As If
Next : Emmerdale spoilers: Chas Dingle gets Robert Sugden out of jail as Aaron Dingle heartbroken | TV & Radio | Showbiz & TV