Soil on hilltops in this photo is lighter in color, revealing a loss of fertile topsoil. 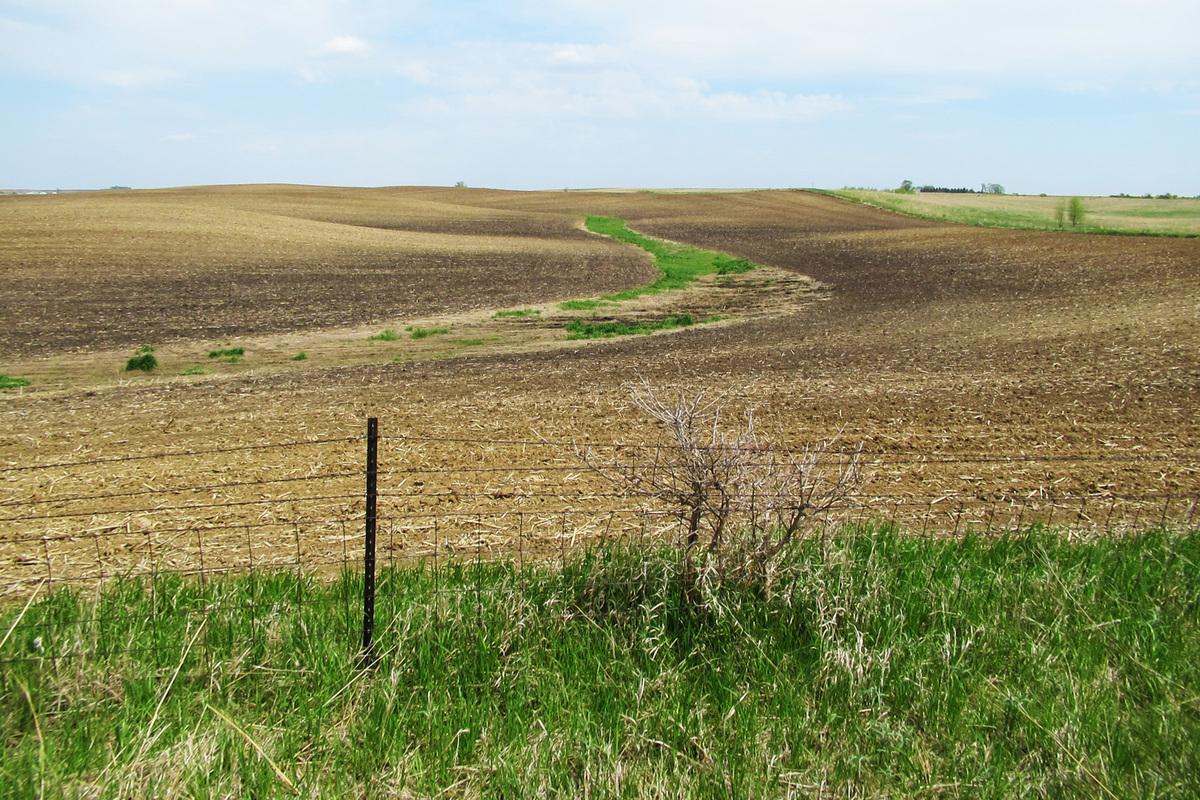 Soil on hilltops in this photo is lighter in color, revealing a loss of fertile topsoil.

Farming has destroyed a lot of the rich soil of America’s Midwestern prairie. A team of scientists just came up with a staggering new estimate for just how much has disappeared..

They say that the most fertile topsoil is entirely gone from a third of all the land devoted to growing crops across the upper Midwest. Some of their colleagues, however, remain skeptical about the methods that produced this result.

The new study emerged from a simple observation, one that people flying over Midwestern farms can confirm for themselves. The color of bare soil varies, and that variation is related to soil quality.

It’s full of living microorganisms and decaying plant roots, also called organic carbon. When settlers first arrived in the Midwest, it was everywhere, created from centuries of accumulated prairie grass. Plowing, though, released much of the trapped carbon, and topsoil was also lost to wind and water erosion. The soil that remains is often much lighter in color.

Thaler and his colleagues compared that color, as seen from satellites, with direct measurements of soil quality that the U.S. Department of Agriculture has carried out, and found that light brown soil contained so little organic carbon, it really wasn’t A-horizon soil at all. The topsoil layer was gone. What’s more, Thaler found that this was consistently the case on particular parts of the landscape. “The A-horizon was almost always gone on hilltops,” he says.

Thaler believes that a century of plowing is to blame. The soil gradually fell down hillsides, a little bit each year, as farmers tilled the soil.

Thaler’s team then expanded their study to fields of corn, soybeans, and other crops within a large area of the upper Midwest that includes much of Indiana, Illinois, Minnesota, and Iowa. They calculated that about a third of the crops were growing on erosion-prone hills. This produced their estimate that a third of all cropland in that region had lost its topsoil.

That estimate is far higher than those published by the U.S. Department of Agriculture. “I think the USDA is dramatically underestimating the amount of loss,” Thaler says.

Some other soil scientists, however, are skeptical of Thaler’s methodology. Michelle Wander, at the University of Illinois, says that the study relies on a series of assumptions to fill in gaps in the data, and those assumptions probably overestimate topsoil loss. She also points out that topsoil may get mixed into underlying soil layers, rather than disappearing completely.

Even the study’s critics, though, agree that topsoil is endangered. “To me, it’s not important whether it’s exactly a third,” says Anna Cates, Minnesota’s state soil health specialist. “Maybe it’s twenty percent, maybe it’s forty percent. There’s a lot of topsoil gone from the hills.”

Cates says that farmers already know that these eroded hilltops are less productive, and many of them are looking for solutions. “We’re essentially trying to make up for many years of fairly thoughtless practices,” she says.

There’s no quick solution, she says. But there are ways to farm that also rebuild topsoil. They involve less tilling, or none at all. Farmers can grow grass and harvest hay, rather than corn.

0 0 0 0
Previous : Get £15 off your next Iceland shop – plus new Easter treats in stores
Next : Republicans Rail Against ‘Pandemic Of Voting’ In Spoof ‘Daily Show’ Ad