As an actress, an activist and now a royal, Meghan Markle knows a thing or two about traveling.

Before becoming a part of the British royal family, Meghan Markle frequently traveled for her roles as an actress and activist, so it’s no surprise she has several tips for traveling comfortably and efficiently.

The Duchess of Sussex, who married Prince Harry last year and is expecting their first child in the spring, now travels the world for engagements, but in her royal role, she typically participates in more formal interviews and doesn’t spill as much information about her lifestyle.

Thanks to old interviews and blog posts on her since-shuttered blog The Tig,  fans of the duchess can still find travel advice from the former “Suits” star. In 2014, she talked to Allure about the product she “cannot live without” while traveling: tea tree oil.

“It’s not the most glamorous thing, but if you get a cut, a mosquito bite, a small breakout, no matter what it is, it’s my little cure-all,” she said. “It’s inexpensive, it’s small enough to carry on, and I bring it with me all the time.”

Considering her pregnancy, Markle has likely adjusted her use of essential oils (some doctors advise against using tea tree and some other oils while pregnant). She’s also probably chosen a few new favorite products over the years, but before she was a royal, she spoke of her go-to travel hacks.

Check out some of her favorite tips and products below.

How To Bring A Touch Of Home To Your Travels

In a 2016 post on The Tig (the blog is partially available to view on archives site Wayback Machine), Markle shared her go-to travel products, which included a scarf or “thin cashmere blanket that feels like a hug.” The former actress wrote that she never travels without the cozy item as it can be comforting and “feels and smells like home.”

Chatting with Canadian Living in 2015, Markle also mentioned that she never travels without putting on one of her favorite fragrances before leaving the house or packing a small vial of it in her bag. She referenced the scent Bvlgari Blv II, which she said she wore while filming “Suits.”

How To Stay Organized

In a “travel essentials” post on The Tig, Markle wrote that it’s important to take the time to look for a travel case or a piece of luggage that “makes you feel like a frequent flier” so you can stay organized and focus on the “vacate part of the vacation.”

Some of her favorite travel items include pieces from the brand Ebby Rane as well as the First Class Tech Case in the color Amber Orange from the brand Stow.

How To Stay Healthy

On The Tig, Markle wrote that before her flight takes off, she uses hand wipes or a sanitizer spray to clean the personal TV, the tray and the various buttons on and around her seat. She’s a fan of traveling with probiotics and drinks lots of water to stay hydrated.

She also shared a tip she insisted her friend got from actor Leonardo DiCaprio, which requires applying Neosporin to the inside of your nostrils before a flight to avoid getting sick. Multiple doctors, however, have warned this might not work. It’s beneficial to keep the nostrils moisturized while traveling, but the antibiotics in Neosporin could be harmful to the good bacteria.

As for her (often envy-inducing) clothes, Markle told Birchbox in 2015 that she keeps them smelling fresh while traveling by packing dryer sheets in between items. (If you want to contribute to Markle’s environmental missions, make sure to pack sheets that have already been used or reuse them after the trip.) 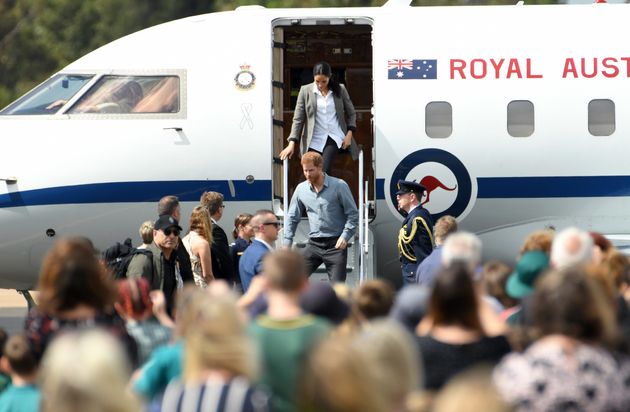 Markle’s travels look pretty different now that she’s part of the British royal family, but a lot of her travel recommendations should still hold up.

How To Keep Up That Beauty Routine On The Go

Of course, Markle has several go-to products for her travel needs. In 2015, she told Canadian Living that she packs Tatcha’s Polished Classic Rice Enzyme Powder, which requires adding water to wash your face. That same year, she told Birchbox that she makes sure to have a multi-use stick and face spritz on hand for touch-ups when she lands. And while promoting “Suits,” she shared her love for Bioré cleansing cloths with Beauty Banter and recommended keeping them in the car for any last-minute travel needs.

How To Get The Most Out Of Your Trip

On her blog, Markle shared a tip she got from her friend, designer Misha Nonoo, who recommended combating some of the effects of jet lag by eating on the same schedule as the locals of the place you’ve landed. Markle wrote that it can help you stay “much more on track” while traveling.

She also encouraged anyone who’s been bitten by the travel bug to stay local when it comes to their activities.

“Find a great cooking class with a local chef, or an art or dance class,” she told Birchbox.