Xochitl Garnica with the Raceme Farm Collective, which wants to add a greenhouse and solar powered lighting. They hope to pay for that with a grant from the Portland Clean Energy Fund. 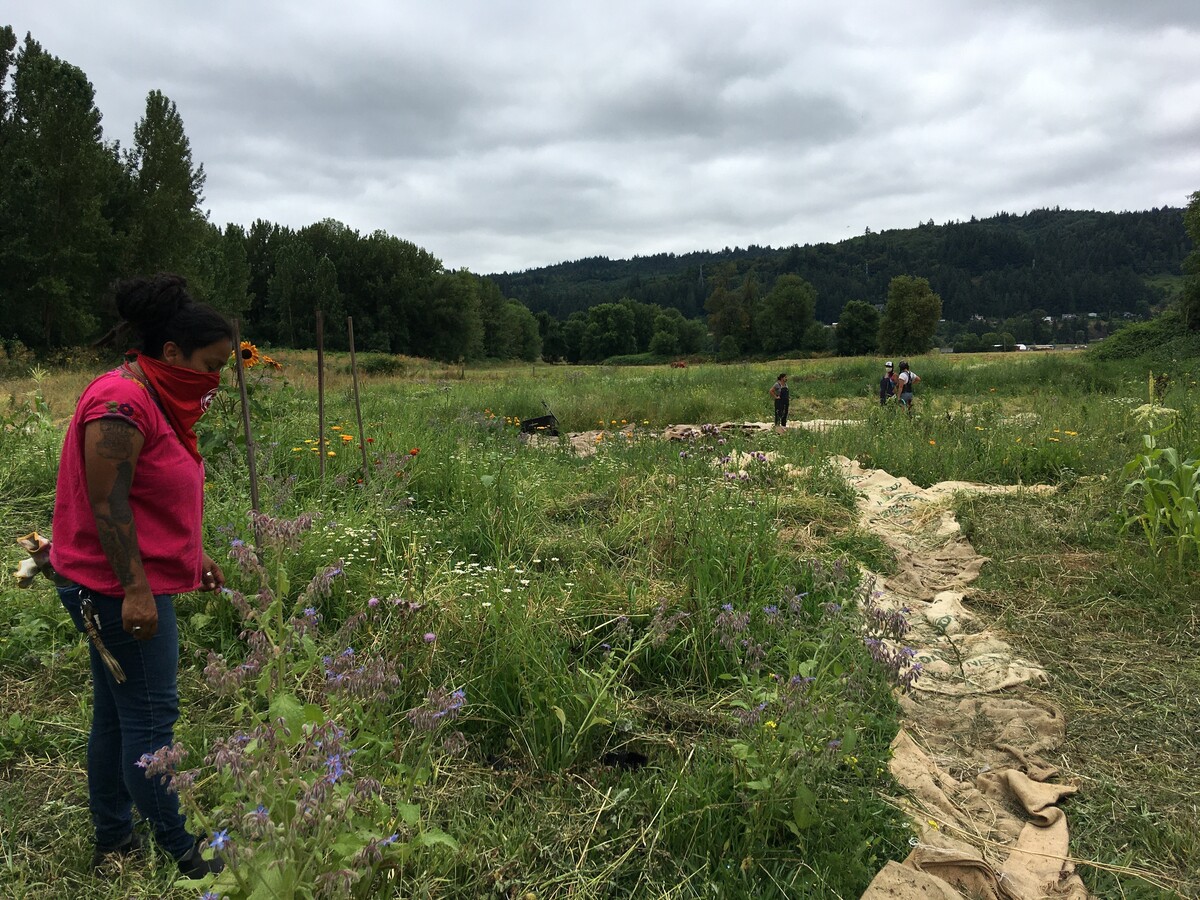 Xochitl Garnica with the Raceme Farm Collective, which wants to add a greenhouse and solar powered lighting. They hope to pay for that with a grant from the Portland Clean Energy Fund.

“We’re really off the grid,” Garnica says. “So, all of that will really help us a lot, so we can help the community that really needs fresh produce.”

These aren’t typical Oregon farmers, more than 96 percent of whom are white.

To expand their farm, they’re planning to apply for a grant through the Portland Clean Energy Fund — a first-of-its-kind climate action program that prioritizes people of color and those with low income.

Martinez says she hopes it will help make up for injustices in the current economic system, where too many people don’t have access to healthy food.

“It doesn’t work,” Martinez says. “It doesn’t consider everyone and a lot of people end up with nothing at the end of it, and we want folks to leave here with armfuls of whatever it is that they need.”

While their farmland is providing valuable food, it’s also preserving green space in the city and sequestering carbon in the soil. Plus, it creates farming jobs for people of color.

All of that fits with the mission of the Clean Energy Fund, an initiative Portland voters approved through a ballot measure in 2018.

Jo Ann Hardesty led the initiative as the first Black woman to serve on Portland’s City Council, and calls the program her baby.

“This is a game-changer,” Hardesty says. “We’re talking about energy efficiency, but we’re also talking about workforce development. If you look at the green field today it’s predominantly white male.”

Hardesty thinks the fund could be a national model.

Portland’s program taxes large retailers and should generate $40-60 million dollars a year for things like clean energy job training, weatherizing homes and adding rooftop solar panels. And it’s all reserved for communities more likely to suffer from the effects of climate change —be it air pollution, extreme heat, or weather disasters.

Sam Baraso, who manages the PCEF program for the Portland Bureau of Planning and Sustainability, says the fund will help address “centuries of underinvestment” in communities of color and those with low income.

Those groups are more likely to pay a higher portion of their income toward utility bills, he says, and less likely to benefit from existing programs that offer tax credits for things like solar panels and energy efficiency.

“Oregon’s been a great state in making these investments in energy efficiency and renewable energy,” Baraso says. But “we know that a majority of those beneficiaries were high-income households.”

Anissa Pemberton, a program coordinator with the Coalition of Communities of Color, says that’s why the Clean Energy Fund was designed to allow underserved communities to apply for the money they need.

“People of color communities in general, we have known for a long time that no one is coming to help us,” Pemberton says. “We’ve always had to find our own solutions.”

Portland’s climate justice program has faced pushback from the business community over the 1% surcharge on revenues it requires from retailers that make more than $1 billion nationally and $500,000 locally.

“The stated goals are things the business community supports,” says Andrew Hoan, president and CEO of the Portland Business Alliance. “The disagreement is who is paying for this, how they’re paying for it.”

Hoan says the program’s original definition of large retailers was so broad it included retirement funds and garbage haulers. His group got the city council to exempt those businesses.

This year they tried but failed to pause the clean energy tax to help struggling businesses during the pandemic. So, businesses are still paying into the fund, but very little money has been invested, Hoan says.

“This was approved in 2018, and two years later we are unaware of any large-scale expenses of the fund or job creation numbers that are available,” he says.

So far, the program has only awarded small planning grants to help community groups develop their applications for larger grants. Advocates say the pandemic has slowed their progress, but it’s also made the program even more important for the people it will help.

“We see this as an economic recovery tool,” Pemberton says. “I am hopeful that it will provide a stabilizing force for some low-income Portlanders, especially the folks who are looking for a new job.”

The city expects to offer its first $8.6 million in climate justice grants early next year.