Prince Harry responded to a news story that he and Meghan Markle were quitting social media, noting in a wide-ranging interview with Fast Company published Friday that they had closed their main social media account months ago.

“We woke up one morning a couple of weeks ago to hear that a Rupert Murdoch newspaper said we were evidently quitting social media,” the Duke of Sussex told Fast Company’s Katharine Schwab. “That was ‘news’ to us, bearing in mind we have no social media to quit, nor have we for the past 10 months.’”

The Duke and Duchess of Sussex, who announced their intention to step back as working members of the royal family in January 2020, paused activity on their record-breakingSussex Royal Instagram account last March.

Earlier this month, a report in The Sunday Times declared it “very unlikely” that the couple would use social media accounts again, either for personal use or to promote their non-profit Archewell Foundation.

But Harry said that isn’t necessarily the case for the couple, who now reside in California with their son, Archie.

“The truth is, despite its well-documented ills, social media can offer a means of connecting and community, which are vital to us as human beings,” the royal said.

“We will revisit social media when it feels right for us — perhaps when we see more meaningful commitments to change or reform — but right now we’ve thrown much of our energy into learning about this space and how we can help,” he added.

Harry and Meghan at the annual Endeavour Fund Awards in London on March 5, 2020.

In the Fast Company interview, the Duke of Sussex was also asked about the online harassment he and Meghan faced in the U.K., which they’ve endured from the very start of their courtship.

The Duchess of Sussex, 39, has previously spoken about the “almost unsurvivable” online hate she faced while on maternity leave in 2019. Meghan said she was told she “was the most trolled person in the entire world ― male or female.”

In addition to personal harassment, Harry spoke about the dangers of disinformation online and how it contributed to the deadly U.S. Capitol riot in Washington on Jan. 6.

“We have seen time and again what happens when the real-world cost of misinformation is disregarded. There is no way to downplay this,” the duke said. “There was a literal attack on democracy in the United States, organized on social media, which is an issue of violent extremism.”

“We are losing loved ones to conspiracy theories, losing a sense of self because of the barrage of mistruths, and at the largest scale, losing our democracies. The magnitude of this cannot be overstated, as noted even by the defectors who helped build these platforms,” Harry added. 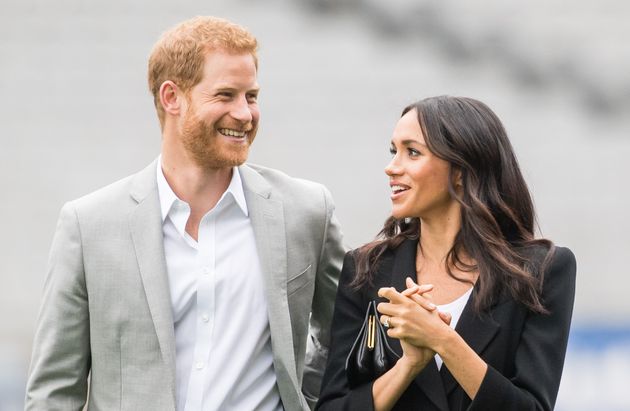 The Duke and Duchess of Sussex during a visit to Dublin July 11, 2018.

The couple has continued to speak out against disinformation and online hate during virtual appearances over the last year.

In terms of actions that that internet and social media users can take, Meghan has previously offered “one clear, tangible thing” people can do to stop misinformation.

“It really just includes not contributing to or even clicking on misinformation,” the former “Suits” actor said while speaking at Fortune’s Most Powerful Women virtual summit in September. “And when you know something is wrong, reporting it, talking about it, ensuring that the facts are getting out there.”