Residents in Ventura, Calif., believed large hilltop water tanks would provide ample water during a wildfire. But the water stopped flowing for some residents trying to protect their homes during 2017’s Thomas Fire. 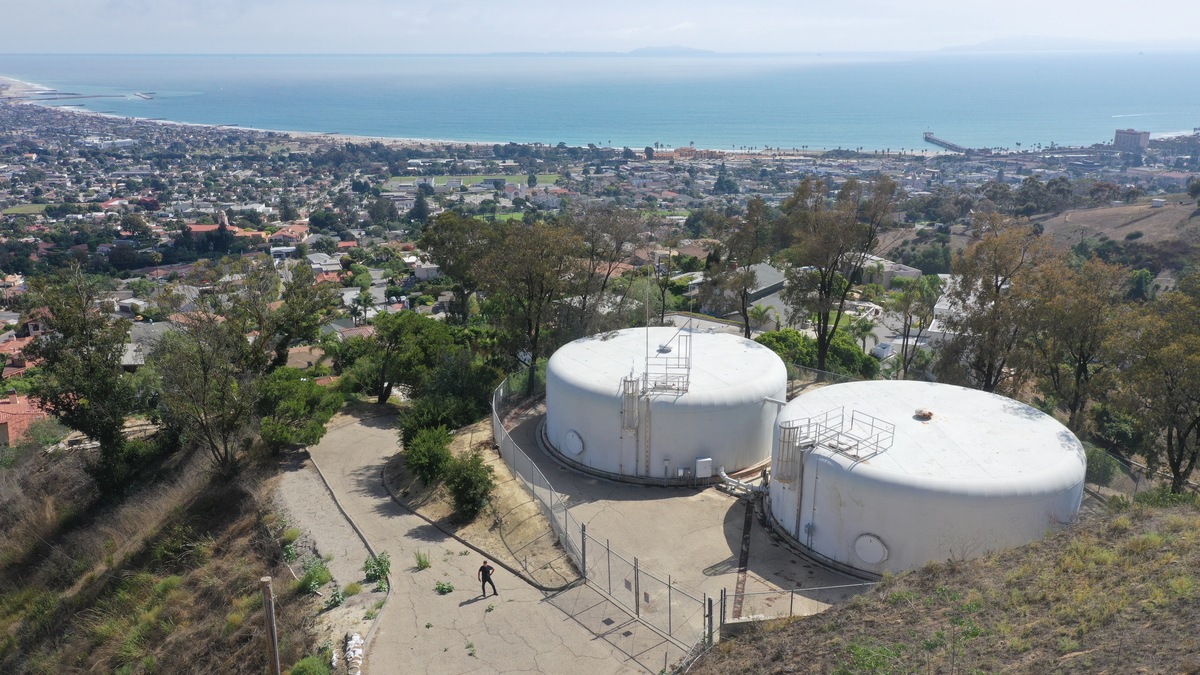 Residents in Ventura, Calif., believed large hilltop water tanks would provide ample water during a wildfire. But the water stopped flowing for some residents trying to protect their homes during 2017’s Thomas Fire.

Native Californian Leslie Ogden has seen her share of wildfires, but never did the retired schoolteacher dream one would roar into her own neighborhood as happened on the night of Dec. 4, 2017.

“On the curve of this street as you come in, one of the houses was in full flame,” she recalled while standing on the front deck of her home recently. “And it was sending a river — probably 10 yards wide — of embers across the street. It was this river of fire.”

Having just dropped off the family dog and car to safety at a friend’s, Ogden was on foot that night nearly two years ago. She was hiking the narrow, winding roads back home to join her husband and nephew as they defended the family home from what would become the record-setting Thomas Fire.

Four of the five houses across the street from us were all on fire.

“And as I turned the corner,” she said, “I realized four of the five houses across the street from us were all on fire.”

For several hours, the trio worked to save their home and the homes of neighbors from also burning down. Armed with garden hoses, they doused spot fires on rooftops, on decks and in the dense shrubbery around the houses.

But then, the water stopped flowing.

“I was getting reports from people calling me saying, ‘What’s going on? The water is out,’ ” said Steve Bennett, Ogden’s husband and a Ventura County supervisor whose district includes the city of Ventura. He said residents in the east end of Ventura — where the Thomas Fire initially entered the city — were among the first to lose water.

“They didn’t have water pretty early in the fire,” he said.

In the nearly two years since the disaster, residents of Ventura say they need a clearer picture of exactly what went wrong during the destructive Thomas Fire, which was sparked by power lines owned by Southern California Edison.

In the initial months after the wildfire, Bennett told concerned constituents to hang tight: An after-incident report by government agencies countywide was in the works and would include details about what happened in Ventura, which lost more than 500 homes, far more than any other jurisdiction.

But the city of Ventura refused to participate, said Bennett.

“Only after I raised the issue at the 11-month mark did the city announce that they were doing their own after-incident report,” he said.

That city report, published four months after that, also failed to answer Bennett’s questions about the water situation during the fire. Among them: How much water was in the city’s supply tanks when the nighttime fire started?

In Ventura’s hillside neighborhoods, like many others in California, the water supply is pump driven into hilltop tanks. Typically, the refilling of those tanks happens at night, when electricity is less expensive.

But in Los Angeles, whenever the National Weather Service issues warnings for extreme fire danger — as happened in the days before the Thomas Fire — the Los Angeles Department of Water and Power immediately fills the tanks to make sure there’s a full supply of water to battle a potential wildfire.

Bennett and other residents want to know whether their city takes similar precautions.

But Ventura officials won’t say and have denied several public records requests that seek these and other answers, citing exemptions to the California Public Records Act that Bennett says don’t apply.

Should they build water tanks in their own backyards?

“People are making big decisions about how safe will they be in the future,” Bennett said. “Should they build water tanks in their own backyards? And they need to be able to understand what went wrong and what’s being done to fix it.”

As a resident of Ventura, Bennett this month filed a lawsuit seeking to compel the city to comply with his request for public records.

Ventura resident Rick Ray also has been asking city leaders for answers after his water ran dry during the firefight to save his home. Although his home did survive, the battle with the city for information, he said, leaves him frustrated and worried.

“I don’t think anyone can really feel safe in the city when you don’t have any public officials willing to go on the record about what our new polices are, based on what the policies were that failed,” he said.

Ogden shares that sentiment. One recent summer day, she said she’s grateful that her home of three decades made it through the Thomas Fire. But she’s also among those who are concerned that the city may not be doing enough to prevent another wildfire from causing similar damage.

“People have lost confidence,” she said. “Whatever improvements we could make as a city are not likely to be done if people are more concerned about protecting their friends … or not looking bad.”

The matter is now in the hands of the Ventura County Superior Court, which is expected to decide the issue within six months.