A person stumbles through deep snow Monday in Marlborough, Mass.. 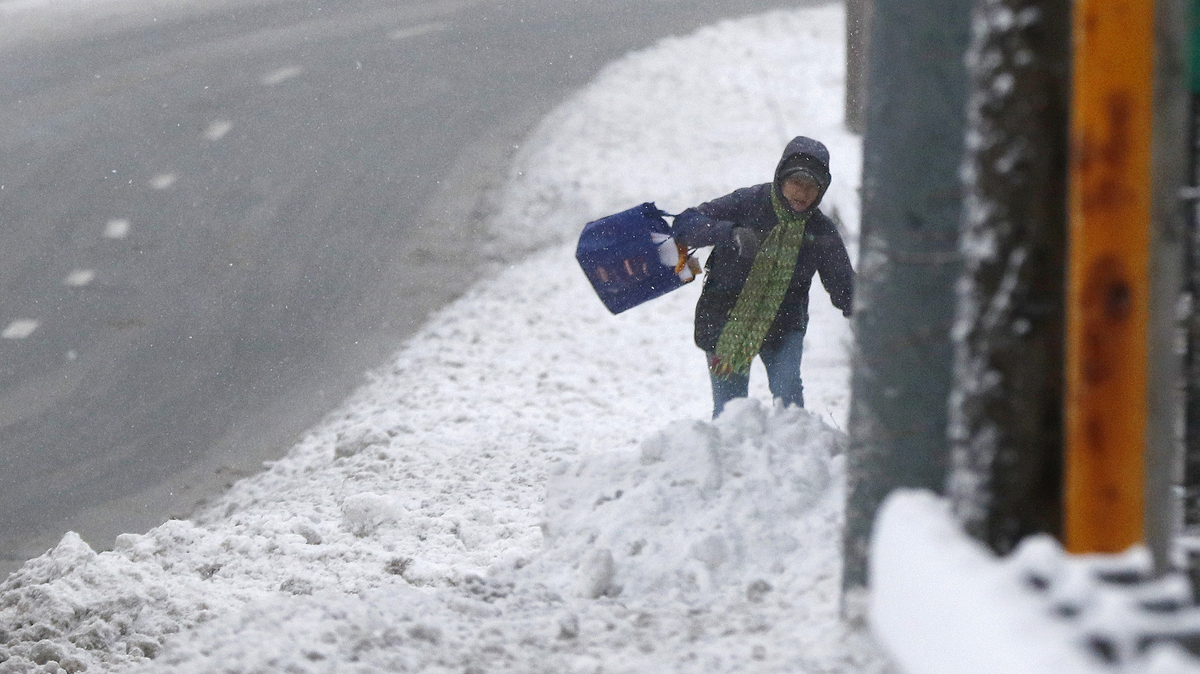 A person stumbles through deep snow Monday in Marlborough, Mass..

Flight cancellations and delays continued Monday as the winter storm that tore across the United States reached the Northeast, bringing several inches of snow and coastal floods. Travel disruptions are likely, with the National Weather Service warning of hazardous driving conditions.

The storm initially formed on the West Coast days before Thanksgiving, snarling holiday travel plans. It slowly moved east over the Great Lakes region and will likely remain until Tuesday morning.

Although Boston has been spared the worst of the storm, portions of Massachusetts could see 6 to 10 inches of snow. Simon Rios with member station WBUR told NPR’s Newscast Unit that state transportation officials deployed more than 3,500 plows to remove snow.

Flood warnings are in effect for coastal Massachusetts, with 1 to 2 feet of inundation during high tide. Weather officials are saying to avoid oceanside areas and to watch out for erosion along dunes and beaches.

The storm’s arrival in the New York metropolitan area coincided with a Sunday-night football game in New Jersey. Andrew Cuomo, New York’s governor, declared a state of emergency in seven counties and deployed the National Guard to assist with clean-up efforts.

Residents in New York City face as little as 2 inches of snowfall, according to the NWS. However, Mayor Bill de Blasio warned that it could easily see more than that projection.

“As we have learned with previous storms, they can come faster and can be larger than originally projected,” de Blasio said at a news conference Monday. “The fact that we got 5 to 8 inches projected for some parts of the city should make everyone quite aware that number could go up and could go up quickly.”

Other regions in New England will face more extreme conditions. Southwest Maine and New Hampshire will get a brief respite from heavy snow during the day but it is slated to resume Monday night with accumulations of 3 to 7 inches. In some areas, more than 11 inches of snow has blanketed roads and cities.

Snow amounts through 9am. Many locations haven’t seen accumulations yet. The second round is expected to bring significant snowfall from the midcoast area south into New Hampshire overnight and into tomorrow morning. pic.twitter.com/QQHODlFxqX

Meanwhile, on the West Coast, inclement weather continues as highway authorities are requiring cars to install snow chains on a major interstate. Several portions of the Sierra Nevada received over a foot of snow overnight. The storm is expected to continue into the upcoming weekend, bringing heavy precipitation to surrounding regions.

The effects of the storm have been felt nationwide. On Sunday, nearly 1,000 flights across the U.S. were cancelled and over 8,700 were delayed, according to FlightAware.

While the Thanksgiving rush has passed, travel plans are still hitting a snafu. As of 12:15 p.m. ET Monday, nearly 460 U.S. flights have been cancelled and over 2,300 delayed.

Paolo Zialcita is an intern on NPR’s Newsdesk.

0 0 0 0
Previous : Caitlyn Jenner Says She Hasn’t Really Spoken To Khloe Kardashian In ‘5 Or 6 Years’
Next : Tiffany Haddish Would Stage A Bonkers Stunt If She Were Oscars Host