Luisa-Marie Neubauer of Fridays for Future takes part in a demonstration in front of the Brandenburg Gate in Berlin on June 2. The protest took place while government leaders discussed economic stimulus and other strategies in the fight against the coronavirus. 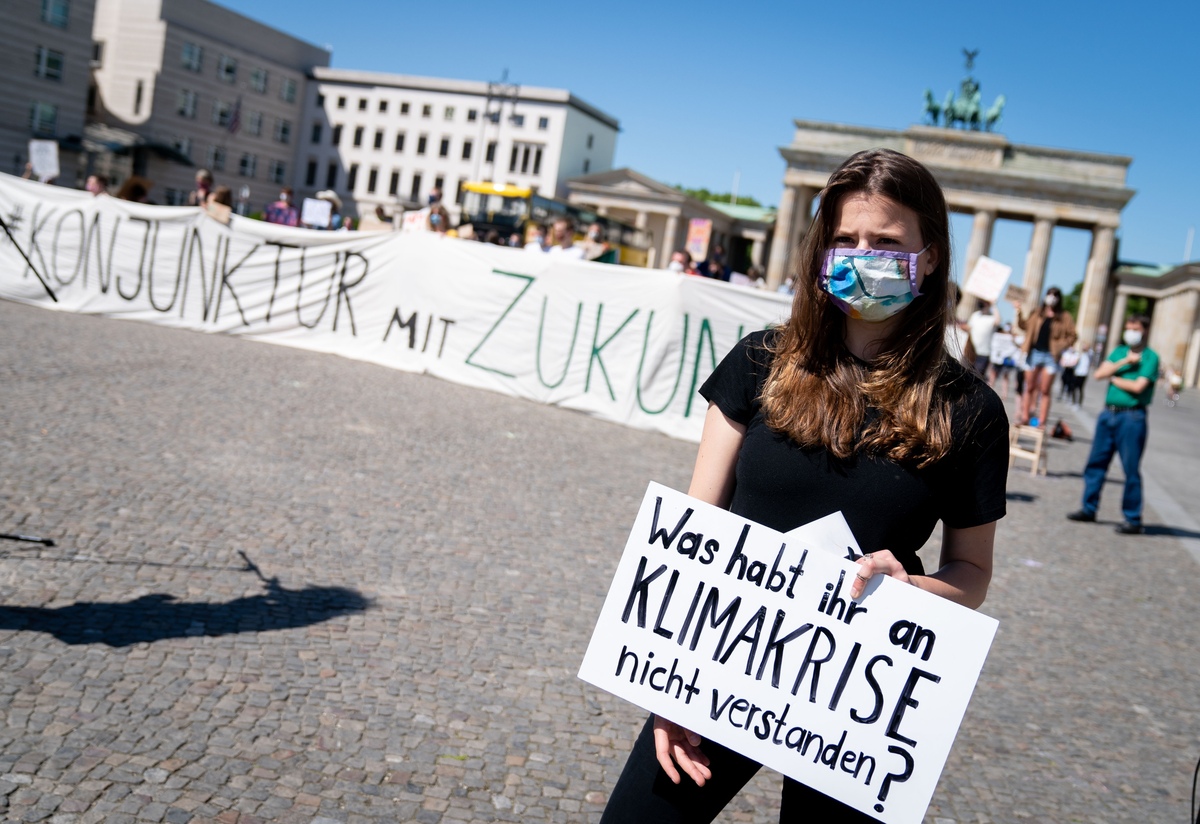 Luisa-Marie Neubauer of Fridays for Future takes part in a demonstration in front of the Brandenburg Gate in Berlin on June 2. The protest took place while government leaders discussed economic stimulus and other strategies in the fight against the coronavirus.

In a not-so-distant past before coronavirus lockdowns, students around the world were storming the streets to demand climate action. In Berlin, there was a name on many activists’ lips: Luisa-Marie Neubauer.

A 24-year-old university student, Neubauer is sometimes considered Germany’s answer to Swedish activist Greta Thunberg. And like the younger Swede, Neubauer staged weekly Fridays for Future student strikes in her city to push for a stronger response to climate change.

But since the coronavirus pandemic, Fridays for Future had to cancel mass mobilizations and move most of its campaigning online. Now the movement is taking careful steps to retake the public sphere.

Though global carbon emissions temporarily plummeted during the shutdown, economies are beginning to rev up again. Activists are pressing for recovery strategies to take into account social and environmental concerns.

NPR caught up with Neubauer recently to talk about activism in the time of the coronavirus, what lessons can be learned from dealing with COVID-19 and what’s happening with her movement. 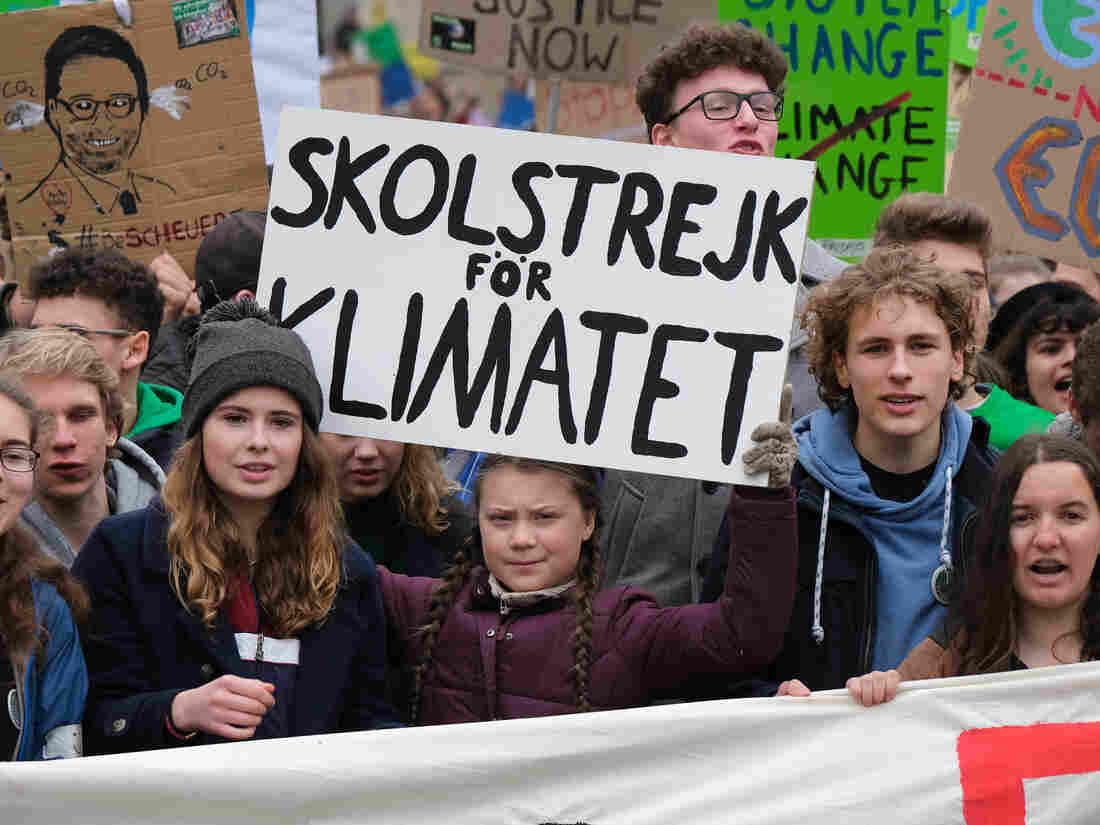 Swedish climate activist Greta Thunberg (center) holds up a Swedish “School Strike for the Climate” sign while participating in a Fridays for Future march with German climate activists Luisa-Marie Neubauer (left) and Jakob Blasel (right) on March 29, 2019, in Berlin. 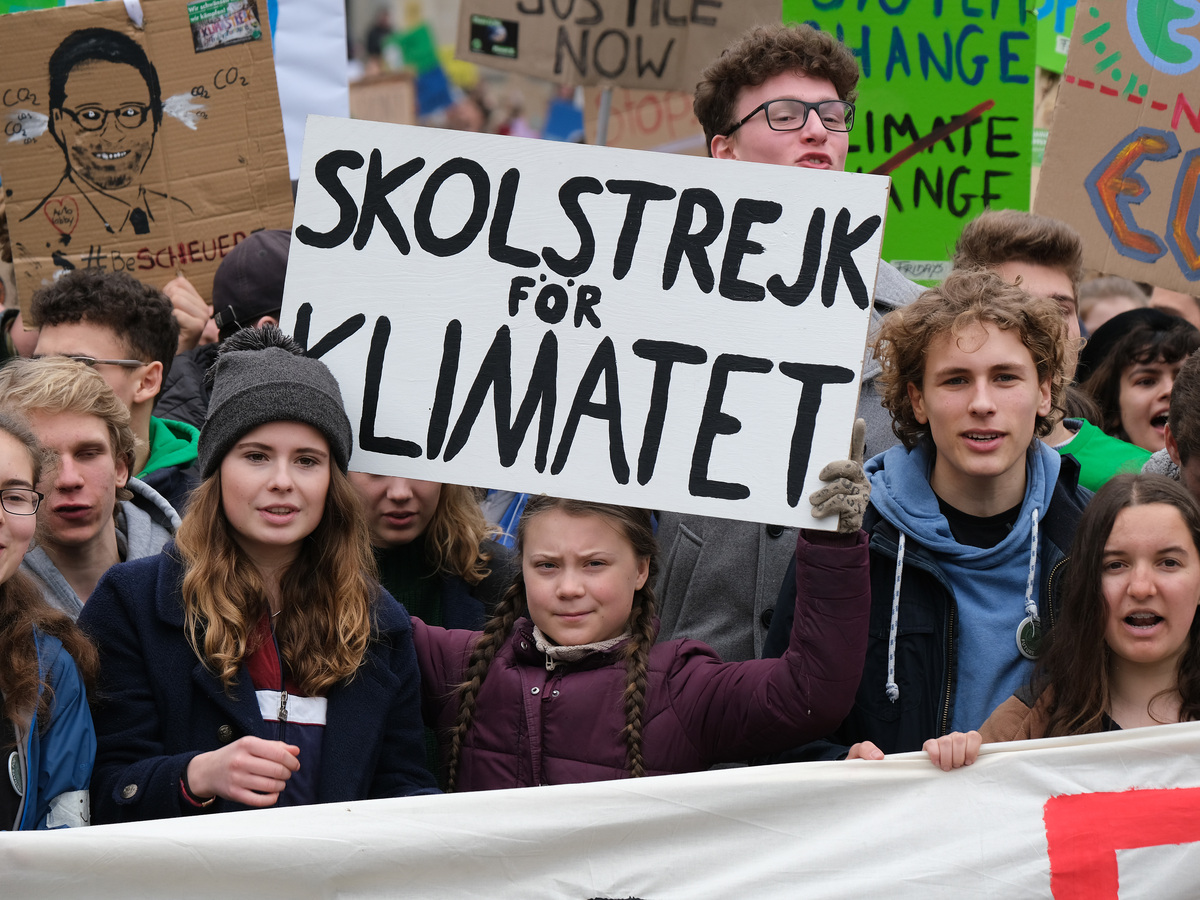 Swedish climate activist Greta Thunberg (center) holds up a Swedish “School Strike for the Climate” sign while participating in a Fridays for Future march with German climate activists Luisa-Marie Neubauer (left) and Jakob Blasel (right) on March 29, 2019, in Berlin.

As the coronavirus has dominated the global agenda, is anybody talking about climate protection anymore?

Luisa-Marie Neubauer: Of course, we’re directing our focus on the coronavirus for now, and that’s the right thing to do. There is no going back to the time before the coronavirus. … But we understood that the climate doesn’t care how busy we are and what we’re busy with — and whether we’re fighting a pandemic at the moment. Because the climate crisis continues to get worse and continues to put people at risk.

We have to make the climate a priority again. That’s what we as activists have to fight for. This is only possible if we fight the coronavirus efficiently, fairly and caringly — as quickly as possible.

Can anything be learned from the pandemic that might apply to the environment?

The nature of the coronavirus crisis is completely different from the climate crisis.

The climate crisis comes at you with less heft, but it requires more incisive action. … We are in the process of destroying so many fundamentals of life that you have to ask to what extent life on Earth will still be possible in the future.

We can still learn a lot from the coronavirus crisis. We can take crises seriously. We can listen to science. We can come together internationally. We can show unimagined solidarity for one another. We can make politics intergenerational: The young stand up for the old — now the old can stand up for the young in terms of climate.

But you can also draw wrong conclusions from the coronavirus. We did not act in January, but we did so in March and thereby prevented the worst. We cannot act on the climate crisis once it is here — that would be too late. The need for preventive politics is essential for climate protection.

You’re one of the founders of Germany’s Friday for Future movement. Did you ever think it would get so big?

I gave my first speech [in December 2018] and said, ‘Hey, we’re in 14 cities today; we can be in 40 cities in a month.’ That was pure utopia at that point. A month later we were in 55 cities. As we grew bigger and bigger, the resistance grew as well, which also made us stronger. We were perceived as a force to be controlled and attempts were made to delegitimize our movement. At the same time, all we are demanding is that the government adheres to its self-imposed goals.

How did you keep up your activism during the time of the coronavirus?

We organized digital protests and actively called on people to stay at home. That worked quite well, but doesn’t solve the problem that the coronavirus restrictions have de facto closed off public political spaces.

This is and was not just a problem for Fridays for Future, but for democracies in general: How can you get public attention, how can you fight injustices if you don’t want to put others at risk? It makes me very hopeful that the Black Lives Matter protests did not turn out to be superspreader events and that people wore face masks. We are also starting to protest on a very small scale here, but we are being very careful, because the coronavirus crisis is not over. 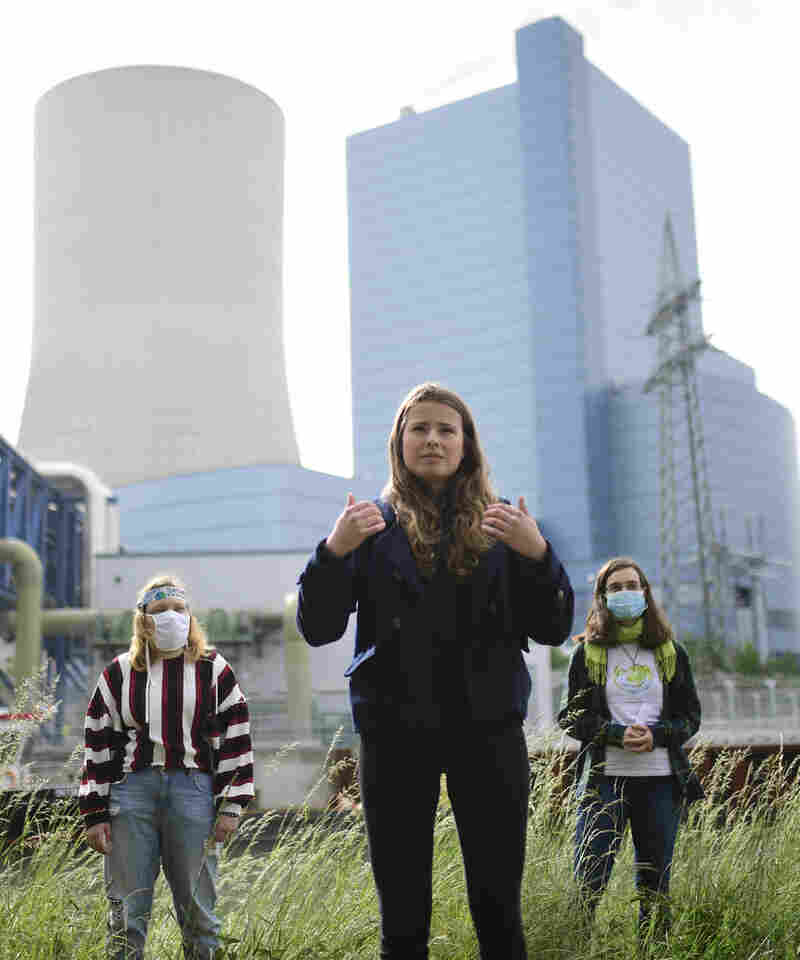 Neubauer (center) gives a statement during an action campaign at a coal-fired power plant of power supplier Uniper in Datteln, Germany, on May 20. the day the company was holding a virtual annual meeting with shareholders. 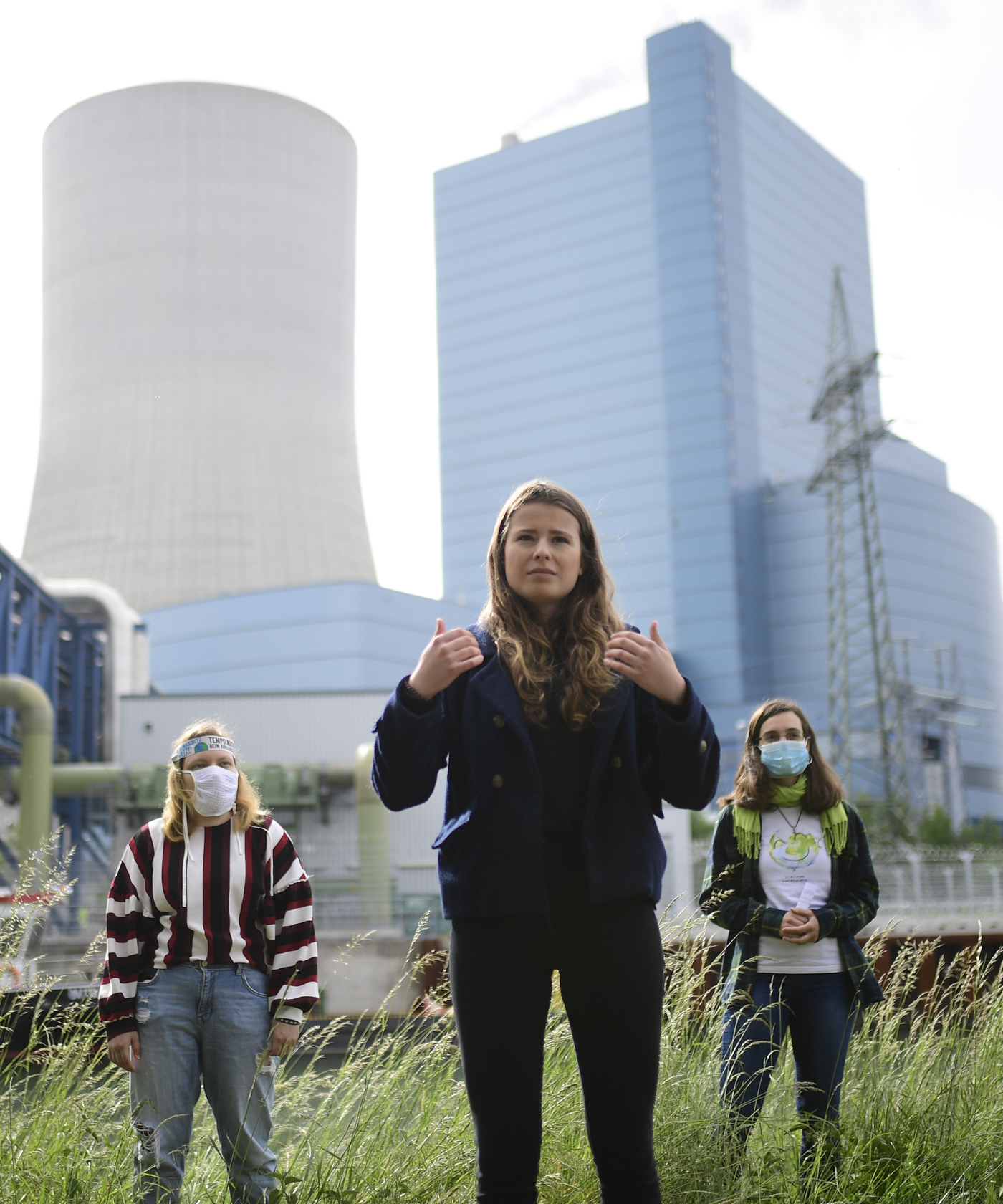 Neubauer (center) gives a statement during an action campaign at a coal-fired power plant of power supplier Uniper in Datteln, Germany, on May 20. the day the company was holding a virtual annual meeting with shareholders.

Looking at the reopening process, what is most important to you?

We need sustainable, just and transformative coronavirus policies that take our emissions budget and the ecological costs into account. We must ensure the massive funds spent to tackle this crisis do not lead to an acceleration of other crises, especially the climate crisis.

Germany passed a major recovery package. In terms of fighting climate change, what is your assessment of the program?

The economic stimulus program in Germany is aimed at saving the economy, not the climate. In doing so, it saves an economy that degrades the climate to an extent that livelihoods are destroyed. … We know that it would have been possible to actually make the economic stimulus program sustainable and to focus it on the effective well-being of the people and not on the well-being of the strongest lobbies. It is to be hoped that the European recovery program will not repeat these mistakes and will invest where the future is promoted — and not destroyed.

How do you view Chancellor Angela Merkel?

For me, Merkel is no longer the climate chancellor. But she proved long ago that you can drive momentum in international climate policies, and earn a reputation for it. She contributed massively toward this. She is a physicist. She understands the physics behind the climate crisis. Now her legacy is at stake; now is the time for her to drive this forward.

And the president of the United States — how do you see his role in terms of climate?

0 0 0 0
Previous : More ‘at risk’ groups to receive free flu vaccine on NHS this winter, No 10 says
Next : Symone Sanders Bet on Biden, and Herself