Zooey Deschanel told HuffPost she’s always loved traveling. Now that she’s a mom, she has a pretty smart travel tip for other families.

Zooey Deschanel has long had a love for travel, and now as a mom of two, she’s picked up a pretty helpful hack for her family that makes their excursions both easier and sustainable.

The “New Girl” actress has teamed up with Capital One for the Purpose Project, an initiative promoting the idea of meaningful travel. For the project’s series on Facebook Watch, Deschanel visited Long Meadow Ranch in Napa Valley to highlight sustainable farming and farm-to-table restaurants.

While talking with HuffPost about her partnership, Deschanel offered tips from her personal travels with her kids and husband, producer Jacob Pechenik, including a parenting hack that some families might not have on their radar.

“I’ve always been a really light traveler, which I think would surprise some people,” Deschanel said. “With kids, you have to carry so much stuff, and I am obsessed with trying to lighten the load when it comes to traveling with kids. I think the best thing that I’ve discovered ― and it doesn’t work everywhere you go ― but when you go to a place, renting things really helps.”

While strollers and cribs are more obvious choices for renting, Deschanel also mentioned renting smaller things that still take up room in your luggage, such as toys and books.

“That’s definitely been a helpful thing for us,” she said.

In the past, Lonely Planet has recommended Baby’s Away, which supplies cribs, highchairs, beach items, toys and more across the country. BabyQuip has a bit of a different process and connects vacationing families with local “providers,” who are often fellow parents, so they can borrow supplies for their trip. A simple Google search turns up several more resources. Many hotels offer items that families can borrow as well. 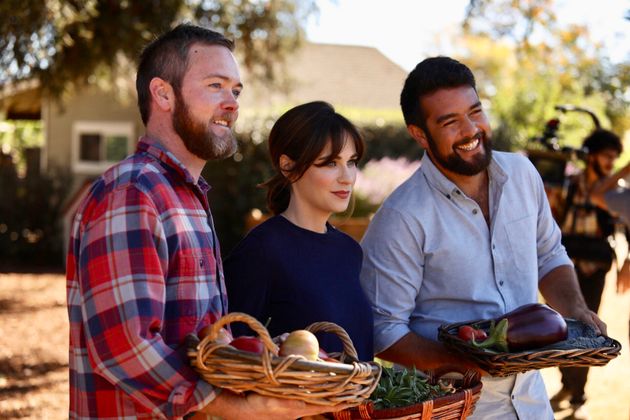 Deschanel and Pechenik are also the founders of The Farm Project, which encourages people to know where their food comes from and adopt more sustainable ways of life. Deschanel said that when she’s traveling, she tries to keep up with The Farm Project’s mission by finding local restaurants that not only offer plenty of options (she’s a vegetarian) but are also just as passionate about local food as she is.

Deschanel, who prefers to take the train in lieu of flying as often as she can, said her favorite travel spots include Greece, Portugal and Paris. She also loves exploring her home state of California. For her, an ideal trip has no strict agenda.

“I like to go and get a feeling for the place and I like to wander around and discover places,” she said. “That’s the best way to experience a city for me.”

She said the beauty of travel, though, is that everyone has their own preferences and experiences.

“A bunch of us could all go on one trip and everybody would take away something different,” she said.